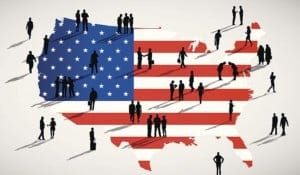 Are We Still Chasing The Original American Dream?

There are many influential beliefs in America, thoughts and values that help shape our individual cultures. These are a combination of values new and old. Every person maintains a different perspective that could help them define and reach for their American dream.

Documents ranging from as far back as the beginning of this country have shown us the rights people have worked for. The Declaration of Independence, being one such document, has defined the stereotypical American dream through equality, freedom, liberty, and the pursuit of happiness. Over time this dream has been altered as society flourished in new ways and focused on new ideals.

The poem Let America Be America Again by Langston Hughes describes the struggle as people try to identify what they as individuals are working towards. More modern attitudes such as the wealthier the better have been inflicted on society, causing older values to seem less important. When this poem was written, America was in the process of once again trying to find itself. Hughes describes the big melting pot community as a place where not everyone shares the same standard American creed or beliefs. As people adjusted their personal values to better align with their current situation, they added to the list of differences that further define our culture.

Every day our culture and beliefs slightly change as depicted in the recent video called What Does America Stand For?. This compilation of opinions from students all across the country helped show what the younger generations are working for, success and achievement as a definition of their American dream. It is very interesting because as you look at different people’s lives you find that they truly believe in a mix of old and new values.

People still believe that equality and freedom are the foundation of our American culture, but they have also incorporated ideas such as status, employment, and wealth. This evolution of opinions is what continues to shape our individual beliefs.

North, Anna. “What Does America Stand For? We Asked Teenagers.” The New York Times, The New York