An ambiguous anomaly that is American ideas

Home 2017 October 4 An ambiguous anomaly that is American ideas 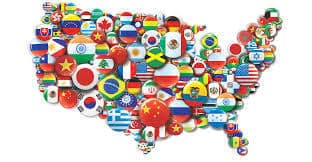 All Americans love to play chess and go for walks on the beach! Doesn’t that sound like an absolutely audacious assertion? Personally, I hate the former, mainly because I’d rather do something productive, like this essay. I believe that all American values are ambiguous because any idea has two polar opposites, agreeing and disagreeing, America is a melting pot of hundreds of millions of people with different religious, occupations, and languages, and that perspective changes over time.

If everyone agreed on everything, or even just one thing, wouldn’t that be boring? Everything exciting derives from disagreement. From politics to stuffed animals, there will always be opinions that differ from another’s, which creates values that are different. For example, in Can a Divided America Survive? by Victor Davis Hanson, he dives into this topic of different opinions in the 2016 election, and that from the media to websites, people browse different sites based on what they like. An except from his article is “The two Americas watch different news. They read different books, listen to different music, and watch different television shows. Increasingly, they now live lives according to two widely different traditions” (Hanson paragraph 3). These different sources of news and even entertainment create different values, which suppresses a unified value on a topic. It is suppressed by creating a sort of “tunnel vision” that limits one’s thinking about different perspectives. This idea of differing opinions is also shown in Je Suis Charlie, but Can We Have a World of Respect? by Stuart Muszynski. This reported from The Blog has a more magnified perspective on an opinion, and it derives from the first amendment of the constitution. He explains that free speech in France is not necessarily free, since hate inducing speech is a crime. “The bad thing about free speech is that … it’s not necessarily tasteful … it can inflame sentiments, fuel emotions … it can prompt negative actions” (Muszynski Para. 4). Stuart’s more specific example of the widely accepted idea that total free speech is necessary shows that even though most feel that it is integral to have this as a human right, some disagree. This shows that even values where most lean towards one side, it still must be ambiguous because of the few that lean to the other side, denying a classification of an idea to be an “American value”

Who doesn’t love salsa? Of course, some must despise it, due to what I said earlier, but I digress. However, I believe that most can agree that you would not call salsa “tomatoes with citrus juice, diced onions, jalapenos, cilantro, and other voluntary ingredients”. This is because it is mixed together and acts as one, much like how you would describe America: a melting pot. Even though it acts as one, however, it is vital to think about the parts that make it up and what each one contributes are. This is why no value can be American, since each part of America has different values and beliefs. A sore thumb that sticks out from this idea is Religion. Sure, according to the Pew Research Center about 70 percent of Americans are Christian or Catholic, but that doesn’t mean you can completely refute the other 100 million Americans and their differing values and beliefs from the Christian majority. The Pew Research center has been studying all types of social trends from religion to race all over the word since 2004, and takes responsibility for many democratic studies. This data shows that these people all have different values that could have similarity or be opposite ends of each other, making it impossible to classify it as an American value. Another way to divide the 300 million Americans up is with language, as seen in an article by Rubén G. Rumbaut and Douglas S. Massey. In their article, titled Immigration and Language Diversity in the United States, they describe the changes in language diversity over time and the ethnicity of people that spoke them. They argue that language diversity comes and goes based on migration periods, but the differing values are forever. “… the number of persons 5 years and older speaking a language other than English at home rose from 23.1 to 59.5 million, with over two-thirds of the increase attributable to the increasing number of people speaking Spanish at home” (Rumbaut Para. 7). This increase in language diversity shows that the language value of people in the U.S. has become more differentiated, further changing values of Americans. Of course, you can also change the American soup into different ingredients such as race, age, ethnicity, and much more.

Finally, it’s time for me to be super cliche! Time heals all wounds! Anyways, the point of this is that time will change people’s views on a value or belief, either because of riot and conquest, or peace and equality. Unfortunately, it happens to usually be the former, because it happens to be hard to change one’s values. An excellent showing of this is the Vietnam War. The effects of this war on American values is that it prompted many to develop a more cynical view of the government that also lacked in trust. It is illustrated in Karl Marlantes’ article Vietnam: The War That Killed Trust. In this New York Times article, Karl argues that the Vietnam war “killed trust” in America due to reasons such as the Gulf of Tonkin Resolution and inflated body counts. “We have switched from naïveté to cynicism. One could argue that they are opposites, but I think not. With naïveté you risk disillusionment, which is what happened to me and many of my generation. Cynicism, however, stops you before you start” (Marlantes Para. 11). This shows how easily certain American values can change–especially about government–in little time, which creates different circumstances for a common “value” if one is possible. Another example of time changing values is African American voters changing parties in the 1960s. This is shown in the transcript When African-American Voters Shifted Away From The GOP by Robert Siegel. In the transcript he talks of when, why, and how this party change happened, arguing that the values of those in power change the values of those under it. “… for the first time, African-Americans are really included under the header of the New Deal within these policies and programs that affect their day to day lives … You have a first lady and Eleanor Roosevelt in the White House who is doing all kinds of things and speaking out very publicly about civil rights. So this combination of civil rights symbolism and economic incentives really compels black voters to say farewell to the party of Lincoln” (Siegel Para. 5). This radio discussion shows that there will always be people who change values, making an American value ambiguous. This created further differing beliefs with the infinitely long debate of Republican or Democrat, another showing of American values always differing in some way or another.
There simply cannot be a value or belief that is “American”. There will always be people who disagree and agree, people who have different values due to religion, ethnicity, or race, and those who change values because of things happening over time. Whether it be those in the endless argument of abortion, those who pray to Jesus or Allah, or those who switch parties, America will always have different values.