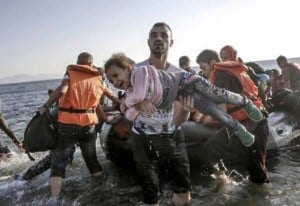 Solution to the Syrian War

Six years ago, the Syrian war, one of the most deadliest and ongoing conflicts in the 21st century, started. With the dictator Bashar al-Assad’s government fighting rebel groups in populated cities of Syrian civilians, it has developed a huge refugee crisis for Europe, in which millions have been displaced from their homes. The war also caused heavy civilian casualties in cities, amounting for nearly one-third of the 400,000 casualties of the war. This is a major issue in today’s world, and we have to present any solution possible to help the refugees fleeing war and civilians caught in the conflict.

The conflict has caused many casualties, which have been reported and broadcast by major news sources. One in particular was the devastating chemical attack in Syria killing dozens of civilians, reported by Kareem Khadder and others for CNN. This chemical attack was carried out in northwestern Syria, killing at least 70 people, and 10 children among the dead. Assad’s government was accused of this chemical attack on the Syrian civilians, but they have been denying the Syrian government’s involvement in this issue. This is just one of the many conflicts that happened in this war, resulting in the death of numerous civilians that is most likely caused by their own government. This adds to the morality of this conflict, with the Syrian civilians thinking that they aren’t safe, even from their own government.

Another news article, this time by Thomson Reuters from CBC, shows another conflict in which civilians have been killed. This time the airstrike was carried out by the US air force, which is ironic because people would think that the US would never hurt civilians in times of war. But frankly, both sides have taken civilians into the death tolls, willingly and unwillingly. The airstrike, supposedly carried out against pro-Syrian government forces, killed an unknown number of civilians, reported by the Russian government, in which they condemned the airstrike.

An article from Anne Barnard for the New York times regarding the refugee crisis set new light on the issue. From refugees in Lebanon, a country that has 1.5 million Syrian refugees, they show their perspectives on the war and what they hope to see in the future. One refugee believes that there is no hope for Syria, derived from his own experiences with the horror in Syria. Others think that the war will go long, but they hope that their children can live in a new Syria, where torture and death is not a normal day thing. But most refugees agree that they do not have enough international support to go back to their home. Either a foreign country wants Assad in power, which would mean continuous fear of torture and arrest for civilians, or wants to outs him, which could end up with ISIS taking over.

The war has many devastating results to the civilian population, which gives the civilians no choice but to run away from the conflict in Syria. The international community has to help the civilians by not choosing a side, Assad or the rebels, but just as a humanitarian effort and helping refugees finding a new home and to adjust in that environment. If the UN supports this decision and encourages other countries to participate in this effort, it will make the biggest difference to all civilians who have been displaced by the Syrian War.