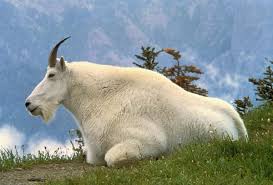 For the sake of the animals, scientists should know why the animals migrated to the park in the first place. Like if their resources depleted or if their habitat was destroyed and caused them to vacate or if it was the predators that made them move into the park. These are questions we could answer if we studied them. We could know why they inhabited the Northeastern and Northwestern portions of the park. Why did they migrate South into the park? Why didn’t they go North? These are also answers we could figure out if we studied them. I think that we should make an organization that go towards studying these animals as well as helping their population grow in size. As well as protect them if they are getting domesticated, hazed, or harassed in their habitats.

In the Handbook I found that there are in fact 208 Mountain Goats in and adjacent to YNP. I also found out that they are infrequently found in the Northeastern and Northwestern portions of the park in alpine habitat. I also found that both sexes (male and female) have horns and that the female’s horns are less curved, thinner, and are sometimes longer.

I think that we should have the Park rangers and the Biologists that go to the park regularly should study these animals. We need to know if they came because of hunters, or depleted resources, or other animals. It is a problem that we need to fix if we need to remove these animals from the park to do so than that isn’t a problem. We should do it for the protection of these animals.

We need to figure these questions out so we know exactly why they moved into the park, or why they moved when they did, where they moved. We might not be able to find the answers to these questions but it is worth a try. These answers could have some significance to the Mountain Goat. I think that if people are aware of these animals than they would try and help keep them in the park and keep them safe as well as find out why they are there in the first place. I think that it would take some money to get researchers to research these animals.