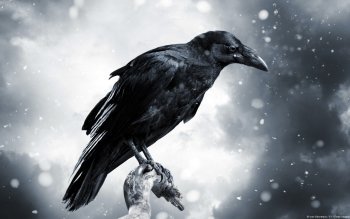 Ravens should be removed from the Migratory Bird Treaty Act because they don’t have natural predators and their population is stable and increasing. This would then allow humans to hunt them which would control their population growth.

Enacted 99 years ago Migratory Bird Treaty Act is among the oldest wildlife protection laws in the books. Since it was enacted, it has saved millions, if not billions, of birds. It is a law that protects birds from people, and it was signed in response to the extinction or near-extinction of a number of bird species that were hunted either for sport or for feathers. But the raven population has grown a tremendous amount over the years because they don’t have any natural predators and, because of this act, they cannot be controlled by humans.

This species has increased 166% over the last 40 years. That is an average increase of to 27.7% per decade. The global population is estimated to be 16 million. The increasing populations of this species in much of the western part of the nation have led to conflict and targeted killing campaigns with large numbers shot and poisoned illegally.

“Authority for the Secretary of the Interior to determine, periodically, when,

of any . . .bird, or any part, nest or egg’ could be undertaken and to adopt

regulations for this purpose. These determinations are to be made based

on ‘due regard to the zones of temperature and to the distribution,

Which is stating that it is the Secretary of the Interior determines whether or not it is illegal to hunt, take, capture, kill, etc any bird stated within this act.

When I went to Yellowstone National Park on April 25-27 I saw along with my peers, that there were ravens everywhere. Wherever we went to in the park, ravens were present. Even at the Grizzly Wolf Discovery Center, the ravens were highly abundant around the bears and the wolves–stealing their food, and only being around the predators for the sole purpose of gaining an easy meal. And on the trip Ranger Jon Nicholson said that ravens are huge scavengers, they are constantly getting into the trash, and that they are everywhere.

The common raven’s population is only increasing, and the only practical and logical solution to this problem is to remove them from the Migratory Bird Treaty Act. Once removed, we can eradicate the issues with their increasing overpopulation by hunting and poisoning the species to control their population. Once the raven’s population is stable, they can once again be put into the Migratory Bird Treaty Act, with the exception of being able to be hunted during hunting seasons assigned to the specific region.