Home 2017 May 25 Representation of Native Cultures 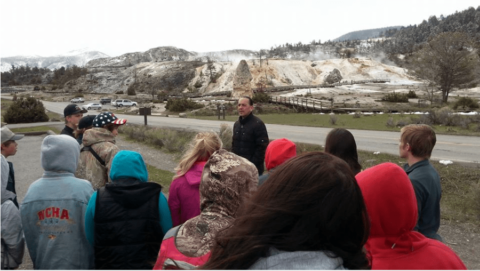 Twenty-six Native American tribes associate Yellowstone National Park with their culture and history. Before Yellowstone became a national park, Native people fished, used thermal waters, and quarried obsidian. Crow storyteller Grant Bulltail, in an interview clip from the documentary film “Before There Were Parks,” said,  “Our blood and bones are mixed with the land.” Native Americans used geysers and geothermal features to conduct ceremonies and use as medicine centers. There is a connection between the physical features in Yellowstone and the Native American tribes and their way of life in the past.

Yellowstone is described by tribes as a very spiritual place, with much connection involving their ancestry. Tribes journeyed into the park during the summer months, chasing buffalo and other animals. They also took advantage of Obsidian Cliff, which supplied them with an abundance of knife blades and arrowheads. The Yellowstone Park area was a place where tribes came to trade resources and interact with one another. All of these facts may just seem like trivia, but they all come together to shape Yellowstone’s past and create what it is today.

However, if you were to visit Yellowstone National Park (YNP) today you would not be aware of its extensive Native American history. This is due to the fact that YNP does not make an effort to represent it. Though there is a Nez Perce display along the Madison, this informational board shares information about one occurrence, one Native culture. Aside from Obsidian Cliff, the only historical landmark concerning Native peoples is Sheepeater Cliff. (YNP) has more than 400 ethnographic resources, which is great. But a visitor would struggle to even find two. In the park there is no resource center overviewing the role Native Americans had in discovering Yellowstone, nor the sacrifices they made for us to have it as a park today. When our class visited the park, we had the privilege of talking to Ranger Jon Nicholson. We asked him how well he thought Yellowstone represented this history, he responded that “In general, … Yellowstone does a pretty poor job.” Taking all of this into consideration, it is obvious that the park falls short in its representation of Native peoples.

Tobin Roop, the Chief of the Branch of Cultural Resources in Yellowstone, commented that disseminating information concerning Native American historical sites could lead to the looting of these sacred locations. While this concern is real, we believe the current state of Yellowstone in terms of Native culture representation in not ideal and should be improved. Looting is always going to be a factor, but hiding valuable information from the public is not a fair trade off.

Knowing the history behind something adds greatly to the value of it as a resource. It also makes the area much more substantial, giving it history or rather a backstory. Informing people of the park’s past can lead to a more acknowledging, self-aware society. Providing this information as a resource at Yellowstone would also be beneficial to the park experience, adding a human element that visitors connect with. Only good comes from investing in Yellowstone’s history.

Dr. Shane Doyle, a leading expert in Native American history and a member of the Crow tribe, is not satisfied with the park’s representation of these cultures. He said, “Not too many people realize this was our homeland.” We asked Dr. Shane Doyle what he would like to see in the park. He responded, “There is a lot I would like to see…” he described an ideal park with teepees and sweat lodges around Yellowstone. He also mentioned a cross cultural communication center where visitors, tribal members, and worldwide tourists can all connect and understand Native cultures. A further solution would be to simply have signs around the park showing a site’s historical relevance. It is pertinent that the park makes some effort to represent native history. It is important to acknowledge that Yellowstone has transitioned through many cultures and all should be represented. Dr. Doyle said, “I, like you, own this park, and I don’t need a piece of paper with my name on it to prove it.” The National Park Service needs to share more information with the public in order to represent Native peoples and history accurately in the park. Providing visitors with information gives them something of value to take with them. We don’t need to loot or take selfies to take the park home with us.

By: Karsen Marjerison and Adrian Cook