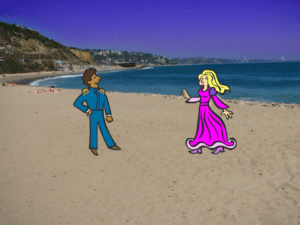 My animation is about the Greek myth about Calypso and Odysseus. Calypso had saved Odysseus  from shipwreck and let him live with her. However, she fell for him and wouldn’t let him go. See what happens here!

Get the link to my script here.

My animation was made on scratch.mit.edu. I first went through the many folklores and fairy tales and myths that I enjoyed. I then decided that Calypso and Odysseus would be great. I considered what the story would be like if Calypso actually let Odysseus go when he asked and put both what actually  happened and what I had considered into a script. I then made Storyboards on storyboardthat.com to model out what would happen in my animation then I actually made my animation.