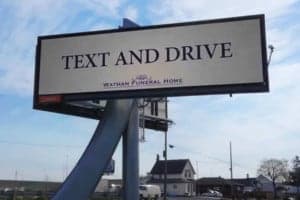 What the hell were they thinking?

My position on this billboard is that it should not be put out in public the way they are putting it out there. Even though it’s trying to get them business, it still seems like they’re promoting death and people should text and drive.