Home 2017 May 9 The Secret Behind Tellietubbies 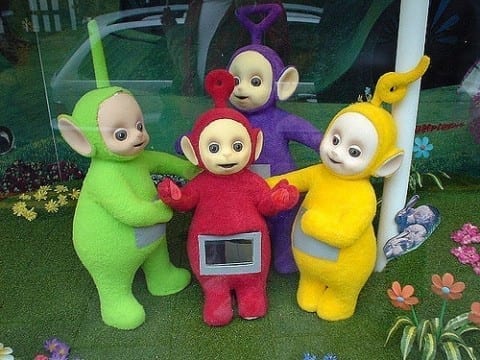 Tellietubbies, one of the most well-known kids TV programs out there (although the show itself has already ended). It features 4 human like creatures that go by the names of Tinky-Winky, Dipsy, Lala, and Po. It seemed like it was an innocent kids TV show with these characters learning about the consequences of their mistakes. The narrator voice explains what is going on in the show and a vacuum-like machine comes up whenever something goes wrong. But what if this seemingly innocent TV show had a creepy background that is not so appropriate for kids watching the show.

This theory was submitted by Tom Power on CBCRadio stating, “A mysterious “voice” tells them when to do everything, from eating to sleeping. There is also a vacuum-like character, the Noo Noo, who is constantly keeping the Teletubbies in check, making sure they follow orders. Then there’s the Pinwheel, a godlike structure at the top of a hill that causes the Teletubbies to drop whatever they are doing and fall to their knees and worship whenever it spins. The Pinwheel then picks its favourite character and turns on it’s tummy TV.” This supports the theory which is that TellieTubbies are bio-genetically engineered slaves which are being prepared to act like humans to take over the human race. The mysterious voice and Noo-Noo are told to keep them in check and the Pinwheel is the “God” that they seem to be worshiping.

I personally do not think this is the case and that it is a just simply a theory but it is something i keep thinking back to. The brain of a child is till developing so what if they are trying to tell the kids something about this. The show itself does seem a little creepy as I watched it a few years later so it does make sense that these theories started spreading.  So what do you think? Did this change our thinking of the show? Is this thought now burned into your brain? Although this is only a theory that people came up with it gets you thinking, what if it were real?