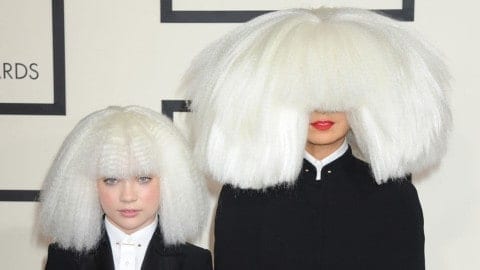 Once upon a time, in Hollywood, during its peak of streaming the number one hits, there was Beyonce. Beyonce was a strong and powerful woman, with vocals that no human being was capable of achieve. She was 36 years old when this “surprise” happened…

“Good Morning babe.” – Beyonce says from the kitchen to her husband, Jay-z.

“Morning, have you checked on our pet?” – Asks Jay-z

Beyonce almost forgot, so then she ran off to the basement, where inside of a jail, behind the bars, there was their ‘pet’ : Sia. She is an Australian girl , mid 40’s, always wearing her wig and writes lovely and really ‘jam’ songs… Every other artist would pay Sia to have a #1 Billboard hint… But Beyonce was more extreme, she just kidnapped Sia and kept her in secret… Poor Sia.

“Hello my little pet, hope you slept well because today you are going to help mommy have a new number one hit.”

Sia with her neutral expression covered by her enormous wig, just nods at Beyonce, turns around to her desk and starts to compose new songs…

“Good job pettie, I will bring to you some eggs as soon as you finish those.” – Shouts Bey while closing the door.

For years and years, that was Sia’s situation… Kept as a compositor for Beyonce… But everything was about to change…

“Where is the new single Sia?” – Screams Queen-B.

Beyonce did not hear anything from Sia, so she decides to go down and check what the music she was doing… But as soon as she turns on the lights and look inside the cell

“AAAAAAAAAAAAAAAAAH ! Mother of Honey ! SIA IS NOT HERE ! HOW THE BILLBOARD THAT HAPPENED?”

“Honey do not worry, she can not go far away from us… Remember? Everyone wants her, but we got lucky enough to kept her…” Says Jay-Z calm on the phone.

Beyonce was really angry and about to run the world with her legs until she could find her gold – Sia.

On the other side, Sia was running as fast as she could to the airport at L.A. , she was smart enough to steal one of Bey’s awards and sell it in order to have a plane ticket to a jungle… To the Amazon.

“Hello, I think I know you…” Says this blondie to Sia.

Sia is trying to run always, so she just nods…

“OPS I did it again! Sorry but I am Britney Spears and you are …?”

Sia just wants to fly from the chandelier and get into that plane, so she just says

“I am Chiwawa girl, from Japan.”

“Nice to talk to you Mrs. C, but I need to take the plane to Las Vegas, my fans wait for me… Xoxo.”

Beyonce thinks about where she could be, so she just calls her best friend, mother monster, Lady Freaking GaGa…

“Our secret has escaped I do not know to where and with whom she is, we need to find he-e-e-e-e-er.” – Says Queen-B.

Beyonce and GaGa are now together trying to find Sia, their first stop is Vegas, because she could easily camouflage herself with all those amusing and colorful shows. They find blondie, a.k.a., Britney.

“Hello Womanizer, have you see this woman?” Asks Bey with a picture of Sia.

“Who run the world? Myself HAHA.” Says Bey, looking at GaGa , who is calling for her private jet pilot.

“Thanks Blondie, XO.” Says Bey grabbing GaGa by her arm.

“ Welcome to Brazil, I am your driver, Madonna…”

Madonna is an old lady (almost a mummy) that had her moment in music, but after Rebel Heart, everyone forgot about her, and all she can do now is show around singing ‘La Isla Bonita’.

“HEY I KNOW YOU MATERIAL GIRL!” Yells Madonna from the driver’s seat.

“YOU ARE SIA AND BEYONCE IS TRYING TO FIND YOU!” Madonna breaks the car, but as soon as she tries to lock Sia, she is already gone, in the middle of the jungle.

“Beyonce! Sia is in the Amazon, I am here waiting for you in my Vogue taxi.” – Finishes Madonna on the phone.

“Who is ready for a predator and prey game?” Asks Bey.

Madonna starts to drive the fastest that she could ever do… They arrive in the middle of nowhere, the Jungle.

Sia is sort of camouflaged, however her wig is white, so she is basically gone.

Bey, GaGa and the Mummy are now chasing Sia inside of the jungle, where Mummy sees something suspicious…

Sia is now trapped by 3 of the most important women of the music, what could she do?

“Wait, was that all a dream? Or it was real? I am so confused…” Asks bey to herself mentally.

Sia is not there.

“R.I.P. Beyonce. I am out of this place and you will never find me, thanks for the adventure at the Amazon yesterday, it was blast. Therefore, your friends are really soft, so I just ran when everyone was busy checking Billboard’s #1. I won this time.”

Bey just faints, and the radio starts to play a song that has overcome her #1 hit, called Cheap Thrills by Sia.