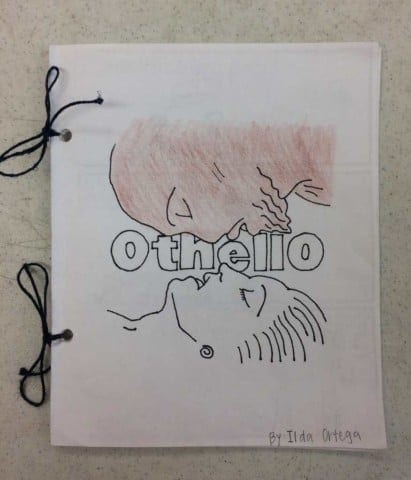 Quote : Cassio: She that I spake of , our great captain’s captain ,/ Left in the conduct of the bold Iago/Whose footing here anticipates our thoughts/A se’nnight’s speed. Great Jove, Othello guard,/And swell his sail with thine own powerful breath/That he may bless this bay with his tall ship,/Make love’s quick pants in Desdemona’s arms ,/Give renew’d fire to our extincted spirits,/And bring all Cyprus comfort .

The Breakdown: Cassio and others are at Cyprus Bay waiting for Othello to arrive safely after going out to sea to fight a battle against the Turks. Everybody is worried about Othello and the crew at this point. When Cassio says, “She that I spake of, our great captain’s captain,” he’s talking about how Desdemona Is basically Othello weak point and lover. Making her Othello’s captain by love meaning that’s who Othello would believe and listen to first before anything . But here is where the dramatic irony comes in at, when Cassio says, “Left in the conduct of the bold Iago”. This is Dramatic irony because we the readers know that Iago is no good bold person. Iago is a bold because if anyone really find out what he is really up to trying to get Cassio out of the second in command position by tricking everybody even the Great Othello, Iago could end up dead. He’s not a good bold person because he lying and manipulating everybody attached to his web just to get what he want instead of saying how he feel about Cassio being chosen. Cassio saying our captain’s captain is being left in the hands of the bold Iago is basically saying, the person who kind of have control over what choices Othello make is left in the hands of a manipulator. This Dramatic irony is important in this specific quote because for Cassio to call Iago bold and Cassio not knowing real plans to strip him of his lieutenant position it make Iago manipulative pass stand out more. From what we know as the readers at this point if Othello don’t make it back, Desdemona will be left in the hands of the Great Iago.

Nay, but be wise; yet we see nothing done; /She may be honest yet. Tell me but this;/Have you not sometimes seen a handkerchief/ Spotted with strawberries in your wife’s hand?…….….I know not that ; but such a handkerchief—/I am sure it was your wife’s —did I todaySee Cassio wipe his beard with.

The breakdown:In this part of the play Iago is telling Othello that Cassio has the handkerchief . When Iago says ” Nay, but be wise; yet we see nothing done;/ She may be honest yet…” This is dramatic irony because Iago know in his head that Desdemona is honest and would never cheat on Othello, but Iago is lying and trying to get Othello to believe that his loved one is cheating.