Knowing the History & having an understanding

Home 2017 April 20 Knowing the History & having an understanding 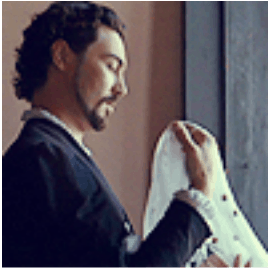 Quote: “ ‘Tis true; there’s magic in the web of it. A sibyl, that had numbered in the world The sum to course two hundred compasses, In her prophetic fury sew’d the work; The worms were hallow’d that did breed the silk, And it was dyed in mummy which the skillful conserved of maidens’ hearts.( Act 3, Scene 4, Lines 74-80)

Analysis: In this quote Othello starts to talk about magic which we haven’t heard him talk about yet like that. Which is funny because in Act 1, Scene 2 Desdemona’s father says “That thou hast practiced on her with foul charms; Abused her delicate youth with drugs or minerals That weaken motion. That quote is saying that Othello used black magic to win Desdemona’s heart and he says that because othello is different and in order for him to have her he has to use magic. I feel like Othello is messing himself up because he is talking about magic which he claims he does not mess around with. “Maidens’ Heart” he is saying that it’s made from virgin blood. For him to bring up the theme of “Magic” because is scaring her because they believe that since he is from a far away land that he plays with magic and Desdemona does not mess with magic. Othello is also scaring her because he is making up a story that is not true.

Quote: “ Ay, but, lady, That policy may either last so long, Or feed upon such nice and waterish diet, Or breed itself so out of circumstances, That I being absent and my place supplied, My general will forget my love and service”. (Act 3, Scene 3, Lines 15-20)

Analysis: In this scene Cassio is talking to Desdemona about the friendship that Othello and him have and he is wanting his friend back. In this quote Cassio is telling her that they have to go talk to Othello fast because if they take to long then Othello will just because more anger with him. Cassio is saying that if they wait any longer that Othello will give somebody else the honor of being his right hand man. When he says “ My general will forget my love and service” is an important thing to look at because Cassio truly has love for Othello and he is happy to work for Othello and be by his side. The theme that we can look at for this quote is is appearance vs. Reality because Cassio believes that Othello will forget his service because he is not around but to be real Othello is starting to think differently of Cassio. Othello is starting to see Cassio different because Iago planted a seed in his head about Desdemona sleeping with Cassio behind his back.