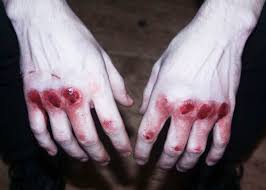 Red swollen eyes paired with tear stained cheeks, messy hair accompanied by bruised knuckles. His eyes were tired, like he had fought the world and the world had won. He saw how damaged and broken the boy was, how he was so emotionally beaten he was unrecognizable. Uneasiness filled his stomach as he stared at the boy. Turning away, he left  the mirror in its place.

“I can’t do this anymore.” Collapsing on the ground, he began to pull at his hair and scratch at his arms. “I can’t handle this,  I can’t, I can’t do this, I can’t.” The pain shooting up his arm calms him immediately. Breath becoming more steady and heart rate beginning to ease, his head falls into his hands. Minutes, maybe hours, pass before his head shoots up again. “I know how to make this all go away,” he says, a grim smile spreading across his face.

Leaping to his feet he races to the medicine cabinet, throws open the doors and grabs a bottle of painkillers prescribed to his grandpa. Pouring them into his hand, he freezes. “What am I doing?” Bewilderment splashed across his face. “I can’t believe I was about to do that. What was I thinking?” He throws the bottle back into the cabinet, and begins to pace. “I just need to sleep, yeah, sleep that’s what I need.”

“Do you know why you’re here?”

“Do you miss being home?”

“Miss any of your friends or family?”

“This is a safe place you know. You feel safe here, don’t you?”

“Because the one thing I was trying to escape from is still with me.”

“What were you thinking?! Do you know what that would have done to our family?!” She said, her arms flailing, makeup running down her face. “What do you want us to do about this?Put you in an institution?” Though she was yelling and had the mannerisms of one who would be furious, she was hurt more than anything. Hurt that the world had been so cruel and heartless.

“I don’t know what to say to help you understand.”

“I don’t want to understand, I want you to get help!”

“This will be your room for the next 9 months until evaluation,” said a man in a black tie and doctors coat as he threw scrubs on the bed. They were the same colour as the sheets, the walls, the doors. “Do you need anything else before I leave you?”

“No. Thanks.” The door shut, he heard the lock click. Alone in the room of white. Alone in silence.