The Importance of Cell Phone Addiction 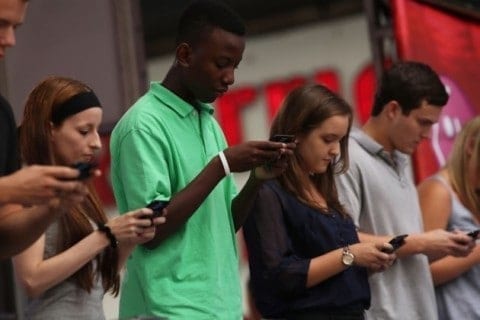 The Importance of Cell Phone Addiction

Cell Phones are the foundation of human society, we communicate with them, we search the web with them, and we post selfies with them.  Let me ask you, have you ever stopped and thought to yourself how much you actually use your cellphone? I didn’t.  A report from Common Sense Media, a non-profit organization focused on helping children, says that an average teenager in the United States spends about 9 hours per day on their cell phone.  Lets think about that for a minute, most teens get about 7 to 7 ¼ hours of sleep every night, so an average teenager today spends more time on their phone per day, than asleep.  This issue has become known as cell phone addiction, a study done on 1,240 parents and their children ages 12 to 18, showed 59% of those teens suffered from cell phone addiction.  I don’t just believe it is a problem, I believe it affects society as a whole, and it will effect generations to come.

I believe that the amount of time people spend on their cell phone has side effects, and it’s proven.  An article written by Ian Kerner, stated that couples spend more time on their cell phones, than with each other.  Then later stating that most people can’t go for more than an hour, without checking their cell phones.  Cellphone addiction has been known to cause nerve damage.  Conditions such as occipital neuralgia cause nerves that run from the top of the spinal cord to the scalp to be more compressed and inflamed due to looking down at a phone screen, causing migraines and back problems.  Anxiety and depression, a study done by Northwestern University stated that the more time you spend on your cell phone the more likely you are to be depressed or stressed.  The list goes on, cellphones are distractions, the National Safety Council reported that cell phone use while driving leads to 1.6 million car crashes per year, 1 out of every 4 car accidents are caused by texting and driving.  A survey done in 2013 states that 63% of smartphone users ages 18 to 29 fall asleep with a smartphone or tablet in their beds.  Is there something wrong with that? Another study done in 2015 stated that the amount of caffeine in a double espresso has less of an effect on a sleep schedule than bright light exposure at night.

The growing epidemic of cell phone addiction seems unstoppable, but if we raise young children without the threat of cell phone addiction we may be able to fight this issue.  There isn’t a lot that can be done to stop the spread of the addiction, but people as individuals can try to use their cell phone less throughout the day, which can benefit their health, and lessen the likelihood of the side effects mentioned.  Nomophobia is a recent phobia that means that an individual has a fear of losing or being without their cell phone.  A survey done on 2,000 people in the U.K. resulted in 66% of those people suffer from Nomophobia, which was an 11% increase from the same study done four years earlier.  This has to be controlled, so I challenge anyone reading to see how long you can go without using your cell phone.  After all, I wrote this on mine.

The Importance of Cell Phone Addiction by Ethan is licensed under a Creative Commons Attribution-ShareAlike 4.0 International License.