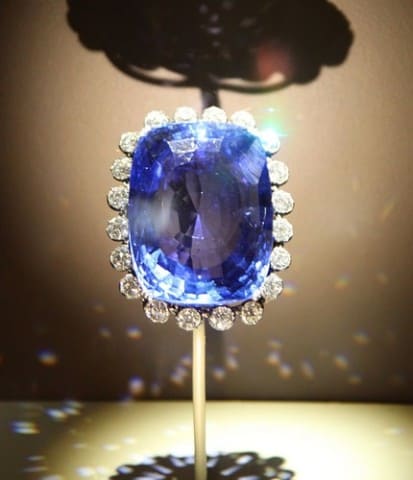 The Hope diamond was originally purchased by a French merchant traveler Jean Baptiste Tavernier. The diamond was to have said to come from Kollur Mine in Golconda, India. This 112-3/16 carat diamond had a “crude” cut triangular shape. According to Tavernier it possessed a beautiful lavender color. Tavernier then sold it King Louis XIV of France in 1668. In 1677 it was recut into a 67 ⅛  carat diamond by Sieur Pitau, a court jeweler. Shortly after it became known as the Blue Diamond of the Crown, or the French blue because of its deep-blue color. The king wore it for ceremonial celebrations. At this point it was placed in a gold setting. In 1749 King XV has it reset, and was used for the ceremonial celebration called The Order of the Golden Fleece. In 1791 Louis XVI and Marie Antoinette tried to escape and the French Royal Treasury jewelry was then handed over to government and was later stolen in 1792. (1)

This is just a brief history of the early beginning of the Hope Diamond’s journey. I am still curious and urgent to find information out about the curse and legends associated with this diamond.

The Blue Diamond is apparently one of the most prized and valuable belongings of the Smithsonian Museum. The now 45.5 carat diamond has a characteristic that initially isn’t visible to the naked eye. Under an ultraviolet light, the Hope Diamond glows red, it is most unique to the Hope Diamond compared to other blue diamonds, that when exposed to ultraviolet light, give off a white-blueish phosphorescent glow. This red glow, lasts for minutes, even after the ultraviolet light has been removed. This property is specific to the Hope Diamond and is something that amazes many. For more information on the in-depth study of this red light phenomenon check out (2).

The Smithsonian discovered the reasons as to why this diamond along with a select few blue diamonds give off a red phosphorescence. Their findings give insight into how these blue diamonds  were created by earth. For more information check out (3).

The Hope Diamond by Shelby is licensed under a Creative Commons Attribution-ShareAlike 4.0 International License.