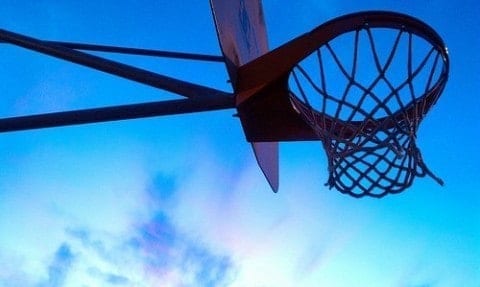 One day in April 2013, Mathew got a basketball from his dad for his birthday.

Lebron James is the one who’s dunking. Mathew saw all 4 quarters of the game.

The next day, he texted his friends to ask if they wanted to see a basketball game. They all

replied right after the text. When Mathew’s friends came to his house the game already started. Mathew

told his friends about Lebron James when he dunked. Lebron’s team won the game.

Mathew asked his mom if she could sign him up for a basketball team. Mathew’s mom did sign

him up. Mathew went to the basketball team tryouts to see what team was he going to be in. Mathew’s

coach said that he passed the team. Then he told his mom that he made the team.

Mathew the next day went to Champs to get some shoes that he wanted. Mathew got full black

On Saturday, Mathew was disappointed because he couldn’t find his shoes. Mathew had to

wear Converse for his basketball game.

Mathew got blue and gray Lebron’s. He used his on Monday, Wednesday, and Friday. Mathew

used his Lebron’s for his basketball game. He made 12 points, 7 rebounds, and 5 assists using his new

Mathew the next day went to play basketball with his friends. His team won by one point.

Mathew made 10 points and 5 assists. He felt like Lebron James.

Next year Mathew bought red, blue, and green Lebron’s. He got them from his dad

Mathew got onto a travel team in the YMCA. The number that he chose was number 23

because Lebron James inspired him.