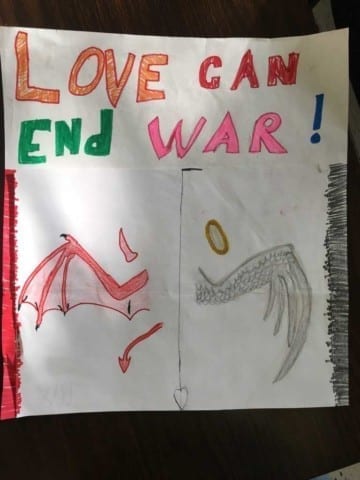 Today I’m talking about my movie poster. I’m going to talk about Romeo and Juliette in 2017 and what is different between now and the old days. My movie poster is showing that how someone looks on the outside should not affect love. Also, that often people from different sides can fall in love, even if there is a war that started when they were younger. After reading  and watching the movie of Romeo and Juliet and Romeo is Bleeding what I learned is that these wars should end because more people are dying from these “ancient grudges”  and each side is losing loved ones. The ancient grudge in my art piece is shown between an angel and a demon.  I’m also trying to show that love can end war. In 2017 in Oakland there was the West side and the East side, the angel and the demon.  There was a war going on between the East and the West. In my movie, someone is from two sides and one boy is for West and  one girl is for East and they want to be married but just because they both are from different sides they can’t get marry and can’t be love. The wall in the middle represents that they can’t love each other. But, in the end the wall came down because the angel and the demon kill themselves like in the play.

I look forward to seeing more of your drawings and reading more about the descriptions. Good job!