The Princess and the Pea (REMIXED) 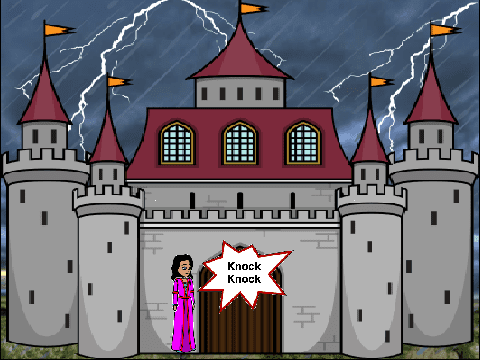 This story is called, “The Princess and the Pea”

This story was written by Hans Christian Andersen and it was adapted by Kevin (me). This story is about a person, supposedly a princess, being tested to see if she is a real princess by the Queen. I hope you enjoy the adapted version of “The Princess and the Pea”.

Here is the original version of the story: http://www.eastoftheweb.com/short-stories/UBooks/PriPea.shtml#1

First I had to pick a story so I browsed through the web. I search on many different websites but I really like “The Princess and the Pea”. Next I had to modify and add to the story because I needed to show the morals of the story and have two different outcomes to the ending of the story. In addition I had to modify the story to make it flow better it my adapted version of the story. I tweaked act 1 (Beginning of Story) and act 2A (Original Ending) but I had to create an entirely new and different act 2B (Another outcome of act 1).

Here is a link to my script:

After I finished story part of my animation I began to create storyboards. I used the website “http://www.storyboardthat.com” to create my storyboard because it has so many different tools. I began to select characters and backdrops for my various different scenes. After I pieced all the looks of my storyboard together, I added some dialogue. I couldn’t fit all of it in but I tried to. This gave me a visual image of what my animation might resemble. In addition, this also showed me what I needed to change like some dialogue, some actions or even the order of some scenes. 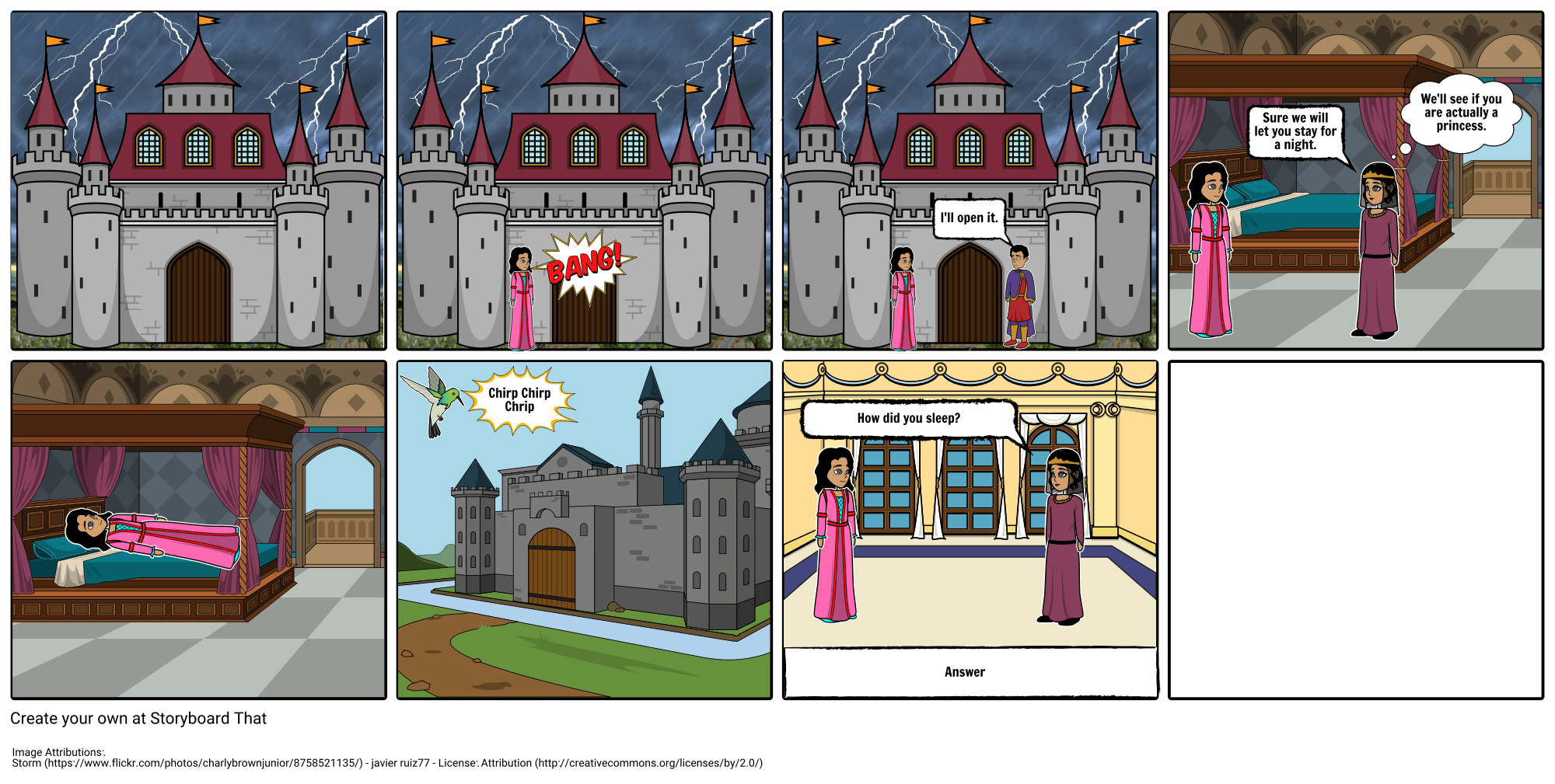 This is my act 1 storyboard. I used this to help me plan out act 1. 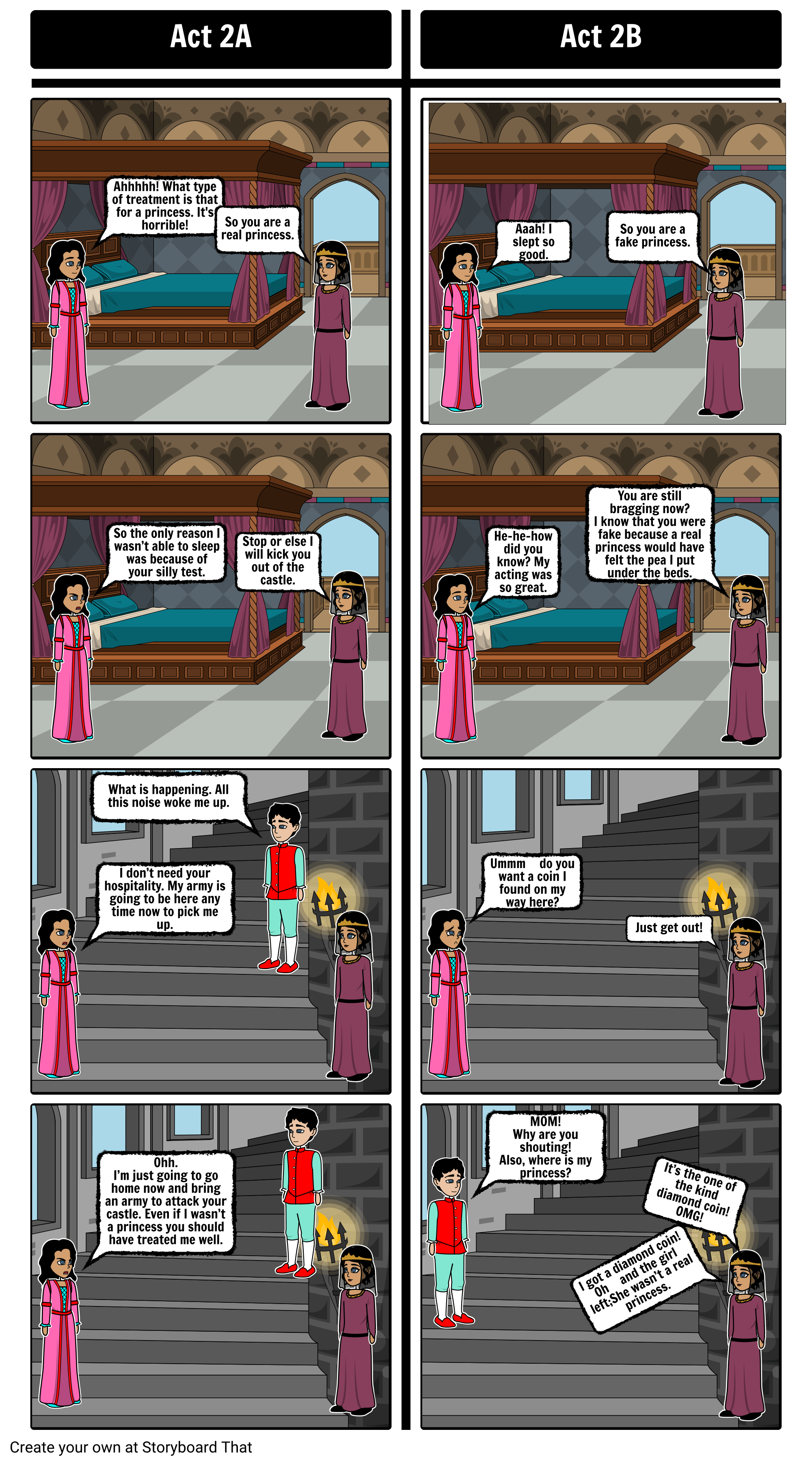 This is my act 2 storyboard. I used this format to compare my two different outcomes.

After my completion of my storyboards, I had to animate my story using “https://scratch.mit.edu/“. This part was one of the easiest parts yet the hardest. I already had a vision of what my animation would look like and I had the script but I needed to code everything. The hardest parts was getting all the actions and location perfect. I had only 480 pixels by 360 pixels to work with. Overall, I thought that my animation turned out pretty well other than my animation being very low quality and choppy.

Here is some of my code I used in scratch: This is the code I used to make my story interactive. This is the code I used to make the mattresses stack up on each other.