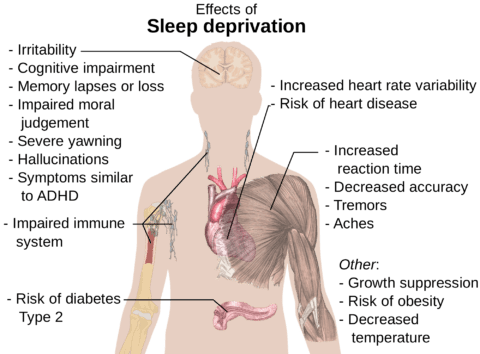 Sleep is a necessity. I think everyone can agree with that. Yet, I seem to lack the adequate amount of sleep for my body due to excessive amounts of homework and the mounds of tests piling up. From sleeping at 1 AM to waking up at 6 AM for school, only gives me five hours of sleep.

On average, a teenager should get 9 to 10 hours of sleep for maximum benefit. Without these, teenagers will feel groggy and tired. They won’t be able to focus well in school. Schools take pride in their students’ accomplishments. So, why do schools refuse to move back their time schedule one more hour? If the school day started at 9, test rates would soar. Tardies would noticeably drop.

Personally, I am not a morning person. I don’t even wake up early in the morning compared to other students. Every day, I wake up at 7, get out of the bed at 7:15, and leave the house at 7:30 for school. However, others wake up at 5 or 6 in the morning because they need more time to prepare in the morning. They’re getting even less sleep than me. Even with the extra hours I have, I feel dull in the morning. In the first hour, I tend to zone out. Talking to my friends wakes me up, but that also leads to less work being accomplished. Then, that leads to my grades dropping. The change of the school start time would not only benefit me but thousands of students all around the world.

Of course, there are cons to starting the school day later. Extracurricular clubs and athletic practices would also be pushed back an hour. Parents would not be able to drop their kids off at school due to the later start time and their own job start time. It would be difficult to find another ride for their child especially if their house isn’t in the way of a bus.

Do the prospects of better grades and increased concentration outweigh the negative effects that could be easily fixed? Bikes are still useful. Carpooling is another option. Kids these days are getting their licenses and cars in their sophomore year. I’m just not sure how easy it would be to change their entire school system across the world. The one now has been in effect for years. It has worked up until now. Is it really worth it to change the system now?