Tattoos in the Workplace

Home 2016 November 18 Tattoos in the Workplace 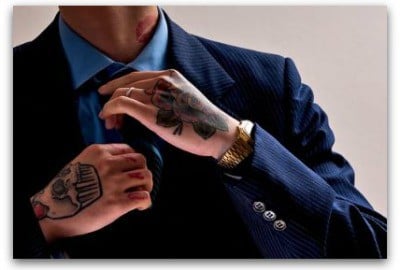 The controversy behind tattoos and piercings in the workplace has always been a fascination of mine for, I live in an art driven family. My Father and Cousin are both photographers. My mother teaches/ sells art and, is studying to become a graphic designer. My older sister is a graphic designer and to top it all off, my Grandmother was an art therapist. Our family has little to no quarrels with self expresion. So, why is it when it comes to self expression through our bodies, there is so much controversy?

Many people In the states have visible tattoos and piercings; “Over 40% of adults have tattoos and over 60% have piercings” (STAPAW n.p.).  Now, back 20 to 30 years ago, more often than not there was a negative stigma involved with tattoos and piercings. But, as the number if inked and pierced individuals are rising, acceptance is on the rise as well. We must move with the times. Employers cannot afford to to deny an individual employment based on his or her tattoos.

It wasn’t until recently that I started to ponder this topic and what it meant to me. I came to realize that I love art too much to allow for it limits to be set no further than the canvas. I’m not saying that everyone should have crazy tats and piercings, I simply admire the art.

As tattoos are becoming more acceptable across the board, much of the concern revolves around higher level “inked” employees. Despite this concern, Rachel Hennessey from Forbes magazine states, “Lax tattoo policies for blue-collar and art-related jobs aren’t shocking, but the increasingly tolerant outlook of frontrunners in corporate, educational and medical industries are more surprising”(n.p.).

Tattoos in the Workplace by Taylor is licensed under a Creative Commons Attribution-ShareAlike 4.0 International License.

Leave a reply to Abi Click here to cancel the reply