Gymnastics: Not Just Glam and Flips 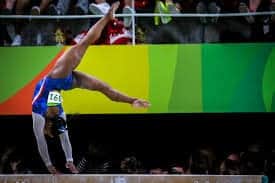 Athletes, usually biased, constantly argue that their sport is the hardest and best.  Although each athlete may have personal reasons for favoring his or her sport, there is solid evidence to support the claim of the gymnast.  In this essay, the best and hardest will be defined by mental and physical straining as well as how the sport can benefit an athlete outside of the sport.  Women’s Artistic Gymnastics requires precise calculations of speed, agility, grip and tension to perform each skill correctly and safely; one careless miss could end a gymnast’s career.  Yet despite these risks, this sport can be very rewarding.  Gymnastics teaches important life skills and creates incredibly strong athletes.  Although it may not be recognized by everyone, Women’s Artistic Gymnastics is the hardest and best sport.

Gymnastics is just as much a mental sport as it is physical. For example, when competing on the vault, an athlete must overcome her natural human instinct to stop and instead run full speed at four-foot stationary object.  She must also will herself to continue conditioning despite nausea that accompanies it, get back on the uneven bars even though there are giant pieces of skin dangling from the palm of her callused hands, and attempt skills that she knows could kill her.  These obstacles teach athletes mental strength, a skill that can be applied to things besides gymnastics, such as in future relationships and careers.

Gymnasts also make incredible sacrifices to pursue the sport of gymnastics. Instead of spending Saturdays at school dances or with friends, gymnasts are most likely at the gym practicing.  On school nights, gymnasts have to somehow manage their homework with their practice schedule, often staying up late to prevent falling behind in school. This management of time is especially challenging for high school athletes, many of whom spend multiple nights practicing for hours in the gym.  In a US survey, the average Level 8 gymnast reported practicing for 15 hours a week, and many gyms require much more.  Such a practice schedule forces gymnasts to learn how to prioritize, a skill that many adults struggle with.  Also, athletics directly affiliated with high schools such as football are often given school passes for games, while Women’s Artistic Gymnastics rarely get such recognition.  This makes it the sole responsibility of the gymnast to manage her school work, and forces the gymnast to acquire time management skills.  Although it may be difficult at the time, gymnasts learn these personal responsibilities at an early age and benefit later in life. Of course, other sports are hard and time-consuming.  Football and Men’s Hockey account for the highest amount of sport-related concussions, proving that they are both dangerous sports.  Most sports utilize a kind of conditioning routine that push athlete’s limits.  But there have been multiple studies proving gymnasts to be “the best athletes” (ESPN Sports Science).  In an ESPN report, researchers found that gymnasts accelerate to around sixteen miles per hour approaching the vault, withstand nine times their body weight when performing Giant Swings on the uneven bars, and flip close to forty-five feet on a four-inch balance beam at an angular velocity of six hundred degrees per second. Faye Barras, a Ph.D. candidate at Oregon State University, found that the force felt on a dismount from the uneven bars is equivalent to being tackled by two or three football players.  Gymnastics is also ranked as the hardest sport according to Sporteology.com, and is ranked in the top ten of ESPN’s athletics list, where sixty sports were evaluated in categories such as endurance, speed, and durability.   Lastly, gymnastics is very expensive.  Competitive programs cost thousands of dollars a year, not including practice wear, meet entrance fees, and team apparel.  This prevents many athletes from pursuing the sport, as the cost is too high.

Gymnastics is truly a combination of both physical and mental struggles, and teaches many life skills that can be applied outside of the sport.  These factors prove gymnastics to be the hardest and best of all, despite any risks and sacrifices the athletes make.  Gymnastics has taught me so much, and the sport has shaped me into the person I am today.   Athletes, remember: gymnastics isn’t just about sparkly leotards, it’s the hardest and best sport out there.