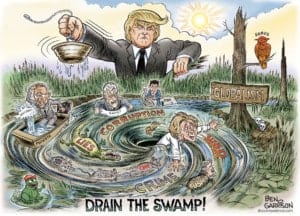 We elect our representatives in order to best look after our interests at Washington. Unfortunately, our leaders no longer look after us. They accept bribes and backroom deals, participate in dishonest lobbies, and run society by rule of the elite instead of the very people they claim to represent. This must end, and our president elect has a solution: impose term limits on Congress, and as it’s termed, “drain the swamp”.

Our government should not be made for and by a class of elites. Those at the top should belong to those below, and should step down when their turn is done. Thus, Congress should not have members who, as Nigel Farage once described of the European Union Parliamentary, “have never worked an honest day in [their] lives.” Currently, we have a class of elites who look after the interests of corporations, a class of elites who care only for themselves—an aristocracy of olden times with no sense of Noblesse Oblige. By imposing term limits, the staying power of bad actor politicians is reduced, and the old guard can be replaced with new members who are not so far-removed from the people they govern. Granted, new congressmen may immediately join in the traditional graft, but term limits would make these positions less desirable for selfish elites. Coupled with a ban on congressional “lobbies”, these seats would, more often than not, come to more noble and selfless people.

Additionally, there is a soft correlation between the time someone spends in office and how many corporate “lobbies” (read: bribes) they accept. Bribery cannot be described as anything but. Why do politicians claim that corporations push no agenda through their so-called “donations” when it is evident that those funds contribute to the over regulation and, in a sense, oppression of the American people? Corporations can buy a politician’s loyalty now because it is an economically sound investment. An NPR piece gave us one example, where for every one dollar a company shelled out, they received the equivalent of $220 in beneficial legislation. Companies nowadays have a higher incentive not to innovate or be competitive, but instead to rig the system. Term limits increase the number of unique politicians a corporation must pay off, and increases how often they must, and in that way America is better protected from corruption.

There is, though, one particularly persuasive counterargument as follows: say the vast majority of our representatives have malicious intent. Surely there must be one person who comes to Washington who isn’t corrupt. Why should we limit the amount of good they can do while in-office? Term limits, while a sound concept, lock the effective representatives out of doing good!

Term limits are a necessary evil. Democracy and our republic must be vigilantly guarded. Even if good politicians are locked out of helping, it is more necessary to keep bad actors out of office. And the so-called “good” politicians may not be even that. Congress has a terrible approval rating but reelection among seats is near 95%. I argue that Congress is ineffective because it’s filled with ineffective people, whom we should remove if we wish to drain the swamp.

The people send to Washington are expected to represent us. They don’t. They commit graft, look after their own needs over ours, and allow special interest groups to rule society through them. New blood in Washington will do extraordinary things for our nation. It is time to drain the swamp.