Political Parties: What should we do?

Home 2016 October 16 Political Parties: What should we do? 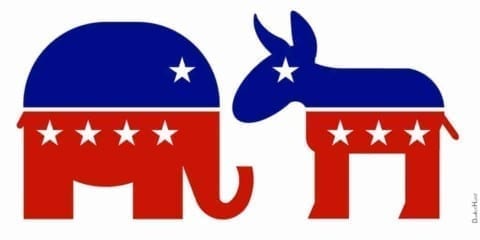 In George Washington’s presidential farewell address, he asked of the American people what seemed to be a rather simple task: do not form political parties. Now we find ourselves in the midst of a heated election, driven by a bipartisan system. This has been one of the messiest if not the messiest election cycle ever. The two main parties, Democratic and Republican, each are falling apart in different ways. The Republicans have nominated a candidate who half of their own party despises. Meanwhile, the Democrats have had leaked emails exposing corruption within the party. Recent polls have shown that approximately twenty-six percent of the nation identify as democrats and twenty-nine percent as republican. Over forty percent identify as independents. There is no question that the dual party system is failing. The question is whether we should let the parties die, or even hurry it along.

One can argue either way. On one hand, the parties act as a basis of support and funding for a candidate. The party also allows for a network of similar minded people working together for general common goals they set forth during their respective conventions. This gives citizens a general idea of each candidate. However, this can also lead to people voting based on party, not the qualifications or individual ideas of candidates. Each party’s’ nominee does not necessarily line up exactly with the overall goals of the party. They may differ drastically on certain issues important to voters.

A major issue with our current system in the U.S. is how little recognition third parties receive. A variety of voices and opinions are an essential aspect of any democracy. The number of undecided voters in this election is unusually high. The problem is that many don’t realize there are other options because the bipartisan system has suppressed other voices. The Commission on Presidential Debates is often considered to be a non-partisan group. This is not true. They are a bi-partisan group. The requirements for being in a presidential debate include polling at fifteen percent. This criterion is almost impossible for third-parties to reach, even with two main party candidates as hated as these. Third parties are not getting an equal say and therefore democracy is being hindered.

There are both pros and cons to political parties. I accept and recognize that. However, I struggle to see any advantage to a bi-partisan system where any other voices are rarely heard. In the future, we as a country need to move away from that system and towards one where a variety of ideas are shared equally. So, what can we do? What should we do?