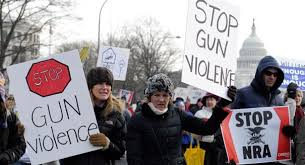 I am touching base with you concerning my opinion on gun control. There is multiple of issues that are related to gun control that needs to be addressed and worked on. Before I begin, let me formally introduce myself. My name is Freya Laguna and I am an upcoming freshman at California State University, Chico. I am an advocate for the LGBTQ+ community, basic human rights, gun control, gender and racial equality. Although there is an amount of issues that needs to be recognized, I’m choosing to talk about gun control due to the uprising of tragic events that is currently happening in America and I do believe that you have the power to improve the act of wrongly using armed forces.

That being said, we need to improve the process of obtaining a gun permit and purchasing one. In my research, it is much harder to get an abortion than to get a gun. I am pro-choice, what a woman does to her body shouldn’t be entitled to others opinions. I do believe that they should tweak the process of getting an abortion to make it easier and smoother for ladies, but the government and yourself should make a law to make it even harder to obtain a gun. For a person to obtain and purchase a gun, they should go through a psychological test, explanation of why they want a gun, and change the pricing of machinery weapons. Which leads to my next statement, did you know that to proceed with an abortion that you would have to pay around $1,500 or more? Whereas, buying a gun ranges from $5 to $500+. Create a law to make it more aggressively hard to purchase a weapon that can harm innocent of people than to worry about women choosing what to do with their own bodies.

Did you know that statistically the death rates and suicide rates for the United States on gun violence are outrageously high? Out of all the countries, the U.S. is the top country that has the most deaths due to guns. Statistically, between the year 2000 and the year 2014, America had 133 mass shooting while other countries, such as Germany, had about 6 mass shootings. Excluding gang and domestic violence, public mass shootings such as Luby’s to Columbine to Virginia Tech each had a 200 days gap between them. Starting from Sandy Hook shooting, each mass shooting had a 64 days gap. There’s 365 days in a year, or 366 days for leap year, those gap days are close and that’s a huge amount of mass shootings. Another major issue is suicide and the fact that it’s easy to receive a gun makes it much easier for those to commit suicide based on guns. Based on statistics, more than 60 percent of people in America had died from suicide by guns. Guns are easy to access to easily harm your people of America. It’s only half the year of 2016 and there is a total number of 27,732 deaths due to guns. Each year, mass shooting and gun violence increase rather than decreases, that is a huge problem that your country is facing.

In recent events, two of the most heartbreaking shootings that had happened was the Orlando Shooting at a gay club and a well-known singer named Christina Grimmie that had been shot with no purpose when she was signing autographs for fans. Starting from, the Orlando shooting, there was 49 people who have died and 53 injured. It aches my heart that the time where it’s supposed to be filled with love and positive energy, someone had to ruin it because they didn’t accept the thought of love. About a year ago, gay rights had been finally legalized in all 50 states of your country, but the fact that even though it’s legalized the LGBTQ+ community is still a threat from those who are against it. Love is love and every human on this planet deserves to love, no one should be against love or even get in people’s ways of being in love. Not only that the LGBTQ+ community is endangered, everyone is exposed from gun violence and mass shootings. Concerts are supposed to be filled with joyous energy and happiness, Christina Grimmie gave so much love to the people she cared about and the people who admired her. On June 11, 2016, she was pronounced dead from the impact of a gun. The shooter’s motive is unknown, but what is known is that she had come outside from finishing up her concert and went outside to meet and greet her fans. The shooter, by the name of Kevin James Loibl, had just gone up to her and point-blank shot her. What is mind-blowing is how easily a criminal can escape the consequences by committing suicide. Grimmie’s brother, Mark Grimmie, had tackled him down; but in doing so, Loibl had shot himself as an easy access for him not to get any penalty for the crime he had committed. If Mark hadn’t tackled him down, himself and multiple of innocent lives would have ended on that night. Do mind that these are not the only accidents that had happened, there’s so many hidden stories that others have not told nor reported and a huge amount of criminals that got away with killing or harming people with the use of a gun.

The statistics are there, the facts are there, and yet there is not one gun control law that can maintain this issue. How many innocent lives will be taken from loved ones by mass shootings and gun violence? When will the misery end? What will you do as President to make America safe? There are so many questions that need to be answered, but the first step is to actually pursue the end of gun violence. People can advocate against guns, but the action has to start now and with you, Future President. Speaking behalf of my youth and generation, this is an issue that is affecting lives of others. I have high hope that your personal opinions wouldn’t make you bias on this topic and you will make America, not only great but safe and secure for your people.