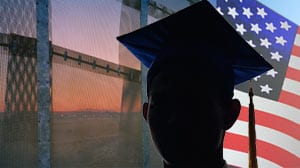 Hello, I am an upcoming freshman in college, and I believe that everyone no matter their background should have the same opportunity for education.

Currently, more than 1 million immigrant children without legal status are living in the United States. They have goals just like us and are not being able to be met because of the restrictions the government has implanted. Coming from a low income household I can relate to what they are going through, but since they are undocumented they do not get full financial support from the government than those who live here. Around five to ten percent of undocumented students attend college after high school, because they do not have the money and are in constant fear. Fear of deportation. The students are ineligible to receive federal funds and that is what is holding them back from pursuing a higher education. Only eighteen states allow undocumented students to pay for in-state tuition but what about the other undocumented students living in the other states? Students who are undocumented are constantly having difficulties with not having enough money, and that should not be the problem. Everyone who chooses to go to college are planning to have a better future. College is a choice and not everyone has to go to college. Some difficulties that undocumented students can face is the immense stress of being in debt or simply not having the amount of money to pay for tuition.

I have a childhood friend who recently graduated from college and she was undocumented. She was the first in her family to go to college.  I remember her struggles when she first began attending school. She struggled with the language barrier, not having the resources she needed for school and not having enough money. She had to be working two jobs and going to school to keep up with her bills. It makes it harder for students like my friend to attend college because they do not qualify for loans, scholarships, grants, or work study.  Her journey to success could of been a lot easier if the government offered more opportunities and support for undocumented students who want to go to college and be successful. Therefore reducing the amount of restrictions and offering more support for the students can help students graduate from college.