Injustice of the Rape Culture 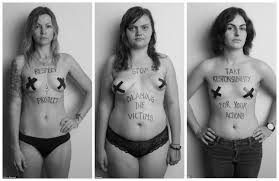 This country has an issue and that issue needs to be fixed immediately. I personally believe that all change starts with the criminal system involving the rape culture. Women should never ever be harassed or mistreated by anyone. In most rape cases, the police always asks women questions like:”What were you wearing?, was it provocative?, did you know the person?, are you sure that you weren’t looking for it? Were you under the influence?”. These types of questions make the individuals feel afraid. NO one should be afraid to walk down the street alone. NO woman should be disrespected by a man. The victims should not be afraid to speak up,empowerment is important. Violence against women is a world wide global issue that NEEDS to be fixed. 1 in 3 women across the world experience violence. 90% of women who are sexually assaulted in college know their attackers.  Rape culture shouldn’t even exist.

I believe that justice should be made for all the women who are emotionally and physically hurt. Regardless of their actions no one deserves to be physically, verbally, or sexually abused. Women, like Brock Turner’s victim, deserve justice for what they had to endure. Turner was convicted in March of the intent to commit rape of an intoxicated/unconscious person, penetration of an intoxicated person and penetration of an unconscious person. He was given 6 months at a prison, after ruining that poor girl’s’ life. The judge that took this case was way too lenient to Brock Turner. Six months and probation is not enough time for him to pay for what he did to that poor girl. Something has to be done because justice for women who have endured rape does not happen too often. Out of every 1,000 rapes 994 perpetrators will walk free. These statistics are outrageous,something has to be done. So here I am writing you this letter so that when you take office, you will do something to lower these statistics and create justice to all the women who were sexually abused. Thank you for your time and I hope this letter inspires you to ‘make America great again’.