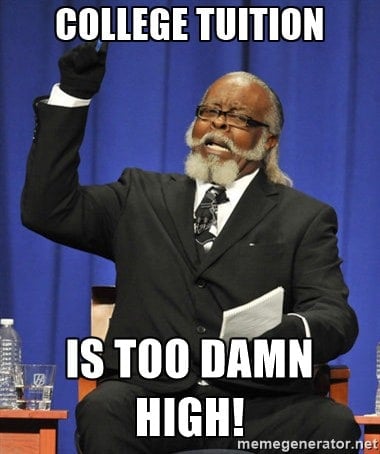 Hello my name is  Teddie Bruce and I am writing  today to talk to you about college tuition and why it needs to decrease in prices.  According to the National Center for Education,back in 2002 the price for the colleges was around $10,000 to $12,628 a year,  now in 2016 those prices have tripled and this is outrageous! The average family makes $60,000 a year, not including a single struggling mother of two. There are some really smart Americans in this world who would love to go to college but can’t because they don’t have the funds because of high cost. Image how they are feeling not being able to go to college to benefit themselves for the future because of the cost of college. College is a choice and I feel that if people take advantage of that choice then they should have a lower cost at school. It’s not like they are being forced to go to school like they were in high school. This is a whole different ball game, some people can’t handle school even from high school so when you raise prices for college and expect people to have all the money in the world to pay for it thats just thinking out of order .

Yes, people have financial aid and yes, people can get scholarships but sometimes they don’t get all of that and financial aid only pays for some of their schooling not all so if you were to do calculations let’s see how much people would be paying out of pocket . If Financial Aid gives the student $18,000 for coast and the student dorm is at least 13,000 plus the 1000 for the deposit fee that leaves the student with $4,000 minus the meal plan which is at least $2600  the student is left with 1,400 and let’s not forget about books and materials you need for the class . So those students are barely making it by.They might need to take out at $200 loan just to survive the school year which no one should do because it makes you have dept.

Another reason why college tuition should be lowered is because you might be missing out on a new and improved doctor who can do research on cancer cure or have the next brain surgeon with the potential of having a cure where older people can’t get Alzheimer’s or help a child with a challenging mind to get where they need to be in life without anyone’s help. You have so much talent here in America that it’s not even funny. Some people think they’re not even good enough for college because of their struggles or challenges with money , including myself. I always wanted to go to college but there was a point in time where my family was not financially stable and it had made me rethink college as a whole . I had already made up my mind I was not going to go to college and i was going to go work to get the extra money then go to college after I had saved up .

If it was not for EOP and my Financial aid I would be . So I am here today not begging,no t pleading,but asking you to please make college tuition lower for Americans today because you have the power to change the world and make it a better place for people who want to pursue their education in a higher manner. Let people help America by getting an education and stopping all the diseases in the world and curing them. And I would also like to say congratulations on winning the election I voted for you!. “P.s dinner’s on me.” Thank you again.

College Tuition by Teddie is licensed under a Creative Commons Attribution-ShareAlike 4.0 International License.