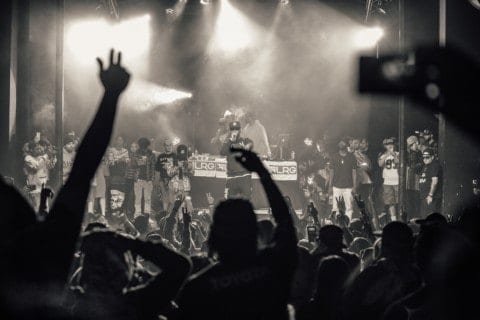 My name is Cory Escobar, I’m also a 17-year-old who is in love with music from back then as the 1990s because of the vibe they give off to some people. Although I really like this type of music, many people find it very hardcore and just don’t like it in general. You might be wondering what type of music I’m talking about but I think we all have an idea of what it is. Rap. Rap back then in the 1990s was such a controversial thing and it really made people feel a certain way of how and why people would make music like this. Some people would blame things on the rappers making the music because it would make other individuals act and what they caused them to do. Most people have an opinion on how it really made them feel and why it made them feel like that. I think people overreacted to them and the music but everyone does have a different taste than other people on every subject and how it affects people.

From 1986 to 1991, there was a group called NWA who was a little controversial in society. They used a lot of words that were really at issue which made a lot of people mad and upset with their music. They made people act up towards the police because there was so much police brutality back then and it wasn’t right for so many reasons. They would accuse the rappers (Eazy-E, Ice Cube, Dr. Dre, MC Ren, DJ Yella) of being thugs and would stop them or have certain rules for them at shows. They have a very popular song called F*** the police which is very political and talks bad about the time when the cops came to the group because of how they look and not because of what they do. They did use harsh words but it was really just them expressing their feelings and telling them how it really affected them and made them feel like they were in the wrong and it created a lot of riots against the police and black and Mexican people because of the way they looked and acted.

I think the rap now and the rap then really changed and how many people listen to ugly stuff now. I really don’t like the music from nowadays because it makes me feel like they’re not really talking about anything that’s currently happening or what’s going on. All they really bring into society are drugs and they fake a person they’re not, some of the teens now who make music talk about them struggling through life when really, they were given everything and they handed them everything as a kid and never struggled. As a person who does struggle, I don’t enjoy listening to music that is out now I like the old stuff because it really explains and shows feelings towards life back then and coming from people who really did struggle made it good for me to listen to. I just simply like listening to something that I can relate to and not fake anything.

Hey Cory,
I found your article to be very interesting because I am a huge fan of rap from the ’90s. Music nowadays is all the same in the way that they all talk about the same things: money, sex, drugs. Music back then was was so unique because it was all about their lives and sometimes, very personal events in their life. The music then really showed emotion and that’s what made it so good. I definitely agree with you when you said that it could get very controversial but I feel that that added a lot of their personal experience with whatever they were talking about like in the song F*** the Police. Although I disagree with what the song was about, I still feel that it’s much better than today’s artists because they really showed their true emotion based on their personal experience. There are some exceptions with today’s artists like Juice World. He’s one of my favorite artists because he rapped a lot about issues in his life and you can tell the emotion he had in his music.
http://www.vh1.com/news/302551/stop-comparing-90s-hip-hop-stars-to-todays-rappers/
Here’s a link you might be interested in. It basically just gives some reasons why ’90s rap could be seen as being better than modern rap. Thank you for your writing and for being able to support your stance on the two periods of rap. I enjoyed reading it.

Hey Cory
I was very interested in your article because I love music and am always interested to learn more about it. I’m going to have to say I disagree with a lot of your points on modern rap, there are thousands of artists out there right now that are singing about their struggles and feelings. However I do respect your opinion and appreciate the information on the article.

I am interested in your post because i am a big music fan myself.I love music and rap is my favorite kind of music

One thing you said that stands out for me is: “ Rap back then in the 1990s was such a controversial thing and it really made people feel a certain way of how and why people would make music ” I think this is

Dear Juan,
it looks like you wanted to include more in your statement. i would love to hear the rest of your feedback
– Cory escobar