Is 1984 related to our society today?

Home Is 1984 related to our society today? 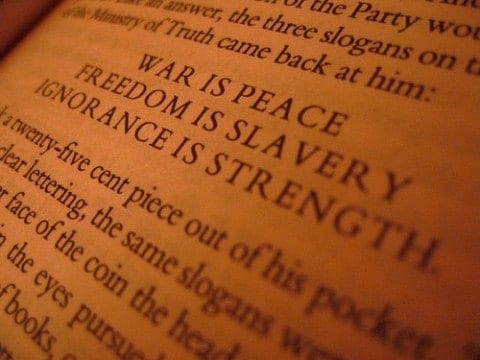 In 1984 by George Orwell there is this main figure that everyone looks at like a god, Big Brother. In our society today, although people may not enjoy it, our main figure is Donald Trump. To begin, the novel 1984 connects to our society because people both consent and rebel against the leaders. In the novel almost everyone consents to what Big Brother has to say or tells them to do for example they have this thing called “two minutes of hate” which is literally two minutes of hating on some guy, Emmanuel Goldstein (symbol of hate). The people of Oceania (where the book takes place) also consent to the slogans of The Party “War is peace, Freedom is slavery, Ignorance is strength” most of the people never act against Big Brother or The Party because there are severe consequences upon those acts. In our society today most people consent to what Donald Trump has to say “Immigrants are bad people, They’re rapist, They’re terrorist” most people don’t act against him because they are frightened of the outcome. Although there is a small amount of people who rebel against Big Brother for example, Emmanuel Goldstein was at the same level as Big Brother at one point in time he wanted to reveal all the secrets about Big Brother, The Party. Also his agents acted against The Party by vandalizing Oceania, tearing posters off the wall. The way people act against Donald Trump is by protesting and boycotting. In conclusion, 1984 relates to our society because people both rebel and consent with the leaders.

I am really intrigued by your post “Is 1984 related to our society today” because of the great connection you made with a novel written after WWII when so many dictators led world powers, to today. It is interesting and at times frightening to see these connections, especially the one you made when you said, “In our society today most people consent to what Donald Trump has to say “Immigrants are bad people, They’re rapist, They’re terrorist” most people don’t act against him because they are frightened of the outcome.” Fear in so many ways is more powerful than any one person and I am scared that fear will impact the future of our society and the world we live in that we assume allows for freedoms and human rights. My question for you is, how do you think we can mobilize people to stop consenting but feel comfortable to act without fear? Do you think this is possible.

I also wanted to write and let you know that I really enjoyed your writing. It was a very great stylistic move to add the parenthesis in your paragraph in order to provide more detail from the book such as the setting, without taking away from your argument. You are a very strong writer and I look forward to reading future posts.