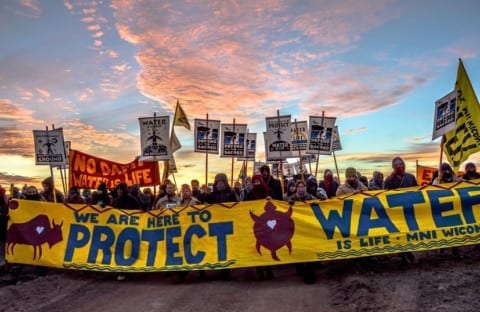 The issue I have chosen to study is the issue of the standing rock pipeline. There is a pipeline that is being constructed through standing rock which is a sacred site to the Sioux people. The company that wants to build the pipeline through the area that standing rock is at does not care about the Sioux people. Even before the pipeline was being built, the company met with some leaders of the Indiginous community and knew that they didn’t want it to be built yet it was still built anyways. This impacts people both in and out of the native community because it is a very sacred site that is being affected and this pipeline also poses a threat to our climate. I chose this issue because I am very passionate about the environment because it is something that is directly affecting my generation.

One way that this issue has been addressed has been through protest. The indigenous protectors of the land have been peacefully protecting the land through peaceful demonstrations. This has been pretty effective, however, I believe other means could be effective as well. I think if a lot of congress members sided with the Indigenous people to block the oil pipeline, that would be extremely effective. Something the reader of this needs to know is that this has been going on for a long time and this is one of the direct impacts of colonization. The white colonizers forced these natives onto reservations and have been trying to restrict them continuously. If you want to learn more, do some research, and help out. Next, I want to learn more about what I can do to help out and I will read some more about this injustice.

PBS News Hour. “Native Filmmakers Are Telling Their Stories on Screens across the Country.” Newsela, 2018, newsela.com/read/native-storytelling-gets-more-screentime/id/41504/

“Meet the Youths at the Heart of the Standing Rock Protests against the Dakota Access Pipeline.” ABC News, ABC News Network, 2017, abcnews.go.com/US/video/revealing-documentary-youth-heart-standing-rock-protests-dakota-45674446