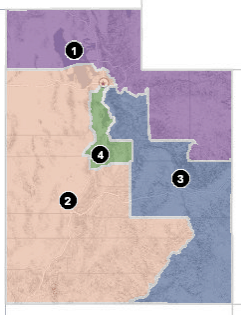 Gerrymandering is on the 2018 November ballot.  Propestion 4 is attempting to get rid of gerrymandering by creating a community of people who will redraw the voting districts and keep them more fair.  This will then allow for the voters of Utah to have their voices be heard. This is extremely important in today’s society because Utah, although still being predominantly republican, has many democratic voters located throughout the state.  Majority of these voters are located in Salt Lake City. By having a committee of people who draw fair voting districts, the people of Utah will be able to have their voices better heard.

Gerrymandering is the process of redrawing voting districts so as to better favour one political party over another.  As it was shown, a fair and standard set of districts would clearly favour whatever population is the majority within the state and they could easily win 60% to 40%.  But due to gerrymandering, the minority group, the 40% would be able to actually win the vote by splitting the voting districts in a neither compact or fair way. This would allow them to win the election.

This greatly affects Salt Lake City and Utah.  Utah is a predominantly republican state, but in Salt Lake City, there is a large amount of underrepresented democrats or independents.  The districts set by Congress have allowed for a steady set of Republican only wins in the past few elections. The districts are not drawn to be truly fair or compact.  Majority of the districts take up large areas of land where if it were to be split differently, there would be a higher chance of a Democratic win. One of the major examples of how Utah is unfairly split, is how Salt Lake City is grouped with southern Utah.

Hey Sean, I really liked how you showed both sized, analyzed both and then explained in a persuasive manner why you chose your side. The amount of research is shown in your detail.

Great article! While I was reading this, I thought to myself, “Isn’t gerrymandering illegal?” Because if it is then the fact that Republicans are doing it with not a lot of resistance means more corruption in the political system. A great claim though, I agree that we should outlaw gerrymandering!