Bring Back the Night 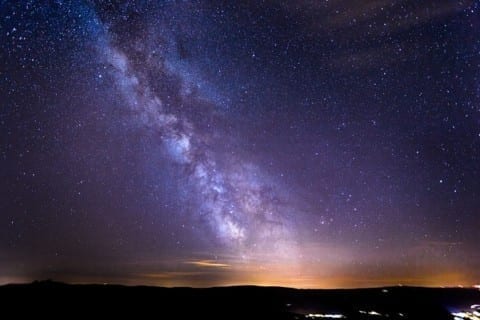 Light pollution is a serious problem that threatens the environment and makes it difficult to see the stars.In addition, the fuel needed to generate electricity contributes to smog, acid rain, and greenhouse gases.
About 30 years ago astronomers began to notice the sky glow, the radiance emitted from urban areas. It impairs our ability to see the stars in most major cities where stars should be visible under normal conditions.
Light pollution causes problems beyond stargazing, too. Evidence shows that artificial lighting has dire consequences for animal behavior, particularly on the ability for animals to navigate at night. Migrating birds are an example of this. There have been reports of birds flying off course toward lights on buildings, towers, lighthouses, and even boats. Since birds use light as this a reference point when flying, they become confused by glare caused by artificial lighting.
Other animals are affected by light, too. Hatchlings of at least five sea-turtle species in Florida rely on an instinctive attraction to light to guide them to water. The increase of lighting on beaches confuse the turtles and cause them to head in the wrong direction. Even worse, street lights attract the newborn turtles into the road instead of to the ocean.
Even if wildlife were not impacted by light pollution, the effects on the environment are still unavoidable. Most electricity is generated by burning coal and oil. This process spews out billions of tons of carbon dioxide each year. This pollution is often caused for nothing, because artificial light is unshielded and shines upward and sideways, which illuminates the sky and does not serve their intended purpose of increasing ground visibility. Urban sprawl has increased the amount of artificial outdoor lighting and there is a total lack of awareness of the consequences.
There are various ordinances around the nation aimed at reducing artificial light. One of the biggest is the Dark-Sky Association, which attempts to establish dark sky certified cities and areas.