Why Trigger Warnings Are Important 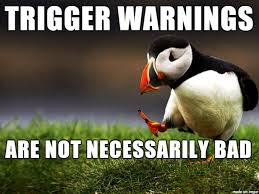 If you spend any time on social media, you’ve probably heard of ‘trigger warnings’. Discourse aside, trigger warnings are simply warnings put on content to prevent someone from looking at something that would trigger a negative mental response, often caused by PTSD. For example, an abuse survivor would avoid content tagged with ‘abuse’. A previously suicidal person would block all mentions of ‘suicide’ on their social media feed to prevent them from relapsing. Trigger warnings are used on a wide array of content, and in real life, too, from mentions food to mentions of hate crimes. Despite trigger warnings being completely harmless and helpful to many people, they’re gathered some negative attention.

When someone is making an argument against trigger warnings, their biggest claim is ‘There are no trigger warnings in the real world!’ That may be true, but trigger warnings can actually help people adapt to the ‘real world’. In fact, trigger warning-less content can actually set people back in their recovery. Let’s use self harm as an example. A tumblr user, who use to self harm but has been clean for 7 months, is scrolling down their timeline (I say tumblr because the website allows you to hide all posts tagged with trigger warnings) and they see an image of fresh self inflicted wounds. The shock of seeing the image could easily cause them a panic attack, or even cause them to relapse. They are now back to ground zero.

That situation could have gone a different way. The tumblr user is, once again, scrolling through their timeline. This time, the post has been tagged with ‘self harm’. They see, in the place of the post, a notice that a post had been blocked. They choose to unblock the post. They are still looking at the exact same picture of self inflicted wounds, but this time without the shock. They feel in control of the situation, and are a step closer to coming to terms with their past problems.

Avoiding altogether content that is triggering is completely valid, but trigger warnings are also necessary to help build an immunity to content you can’t handle seeing. And trigger warnings are not just important online. Your precious ‘real world’ can often make accommodations for people who suffer from PTSD ect. In health education class, I felt extremely uncomfortable when watching an overly-graphic movie on mental disorders. The movie depicted awful and realistic looking self harm that came as a shock to my whole class. I can handle that kind of stuff without extreme trauma, but not everyone can. If the teacher had told students what was coming, a student could excuse themself from the classroom for the day. Instead of watching a triggering video, they could go into the hall or library and research the topic, proving they did work by writing a short paragraph or emailing the teacher a link to the article they used. There are pretty easy alternatives to forcing someone to do or see something triggering.

What is my last argument for why we should respect people’s triggers? It’s the right thing to do. It takes about five seconds to say “Hey, heads up, if you’re triggered by X, this is not the place for you to be.” Tagging a post on social media takes less time than that. You are not affected in any way by trigger warnings, but if you don’t give someone a chance to avoid a trigger, it could ruin their entire day. Realizing that some people are more sensitive to certain things than you are costs 0 dollars and 0 cents.

In conclusion: If you are intentionally opposed to trigger warnings, make jokes about being ‘triggered’, or make jokes or comments that are purposefully triggering, you are a dirt heap.