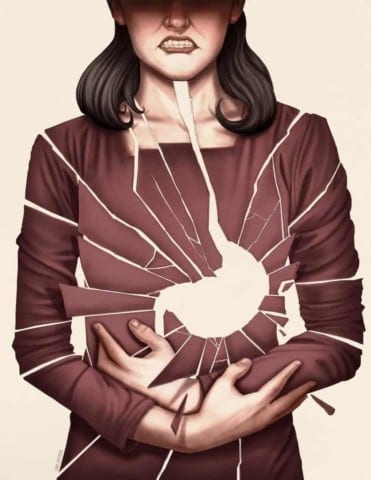 I looked just like everybody else. I came to school every day, I talked to my friends, I did my homework. I was involved in multiple activities, and I cheered at the football games every Friday. The thing is I wasn’t like everybody else. What most people didn’t know was that during that period of time, nine months of my junior year, I was battling an illness called Median Arcuate Ligament Syndrome, or MALS for short.

I’ve had stomach problems since 3rd grade, but for years my doctors couldn’t find out what was wrong. The pain would come for a few weeks and then it would disappear for months at a time. However, during junior year, my stomach pain never came to a stop. I would wake up in the middle of the night crying from pain. An ER doctor told me “it’s just stress” and I should “find a hobby.” I felt alone in the world and that I would be stuck with this pain forever.

I ended up getting diagnosed by an ultrasound tech named Carol, who I still refer to as my angel. Once I got diagnosed with MALS, I learned it required a surgery to fix. I thought I would get the surgery in no time, but I was wrong. It was another six months before I finally had the surgery at the University of Chicago. While all of this was happening, most of the people at my school couldn’t tell anything was wrong with me. I sat in a chair instead of standing in my choir class every day, but people were so unaware of my actual issue, they thought I had knee problems. While I had stomach pain 24 hours a day, MALS is still an invisible illness to everybody else.

The point of this article isn’t for me to complain; it’s to spread awareness. When I learned more about MALS, I learned it’s still an extremely new illness so doctors still don’t know much about it. None of the doctors I went to had ever heard of it before. MALS is most common in teenage girls and its symptoms are pain near the celiac artery, nausea, dizziness, and increased pain after eating or while lying down. The pain comes from a ligament that’s blocking the blood flow from the celiac artery to the stomach. The surgery cuts that ligament and releases the blood flow. The University of Chicago hospital is the #1 hospital in the country for the MALS surgery, but there are about ten other hospitals that perform the procedure as well. For years, girls with MALS had been misdiagnosed as having an eating disorder because it hurts to eat. If you know anyone with similar symptoms, please pass this information onto them. Or if you know anyone that works in the medical field, please do the same.

Although it’s still rare, MALS is becoming more and more common. I want as many people as possible to learn about it, so that way they can get diagnosed and fixed a lot faster than I did. This Washington Post article tells the story of another woman who battled MALS for 5 years. Here are some FAQS about MALS from the University of Chicago and here is some information about the surgery. Thank you for spreading the word and please let me know if you have any questions about it!