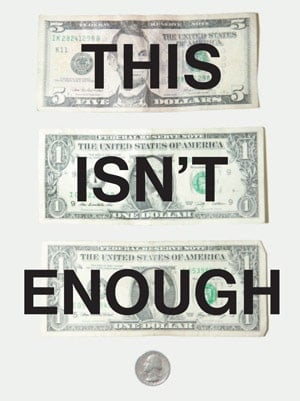 Hello my name is Daisy Ramirez, I live in Anaheim California ,a college student who currently works at two jobs ;a fast food company, and for a car company. Well let me just let you know why I work in the first place.I attend school, work, pay bills, buy personal items and I can’t afford to pay for all of that without working which comes to my point were I believe like many other people that the minimum wage isn’t enough for us average people who live in California.

The American Dream is according to Google definition, “the ideal that every citizen should have an equal opportunity to achieve success and prosperity through hard work, determination, and initiative.” Which in fact is the reason why most immigrants come to the US in the first place, for a better life and more opportunities. Coming to California for example you would expect to live the life ,own a house one day, have a nice car, attend a university and have a job where they pay you good money. Yet in reality , how do you expect the people to live the “American Dream” if they can barely afford to pay for rent and bills.

The issue many Americans are facing is with money, since minimum wage isn’t just enough for us average people. Back in the day, society was working to earn up to three dollars, or maybe a bit less. Up to today the minimum wage raised up to ten dollars an hour. From personal experience that’s a huge difference, I started working getting paid at first eight dollars an hour until right now I get paid a little more than ten. Those two dollars is a huge difference, because I could be making almost $80 more than I use to in a week. Attending a university can be difficult because now you’re independent and considered to be an adult .I have to work to pay bills,tuition, books,gas for my car, supplies like food,and entertainment, it’s basically starting a new life and getting paid the max 1,600 a month but in reality you’ll be making less since they deduct money for taxes. This issue concerns most students/young adults but for adults who have a family and more responsibilities to pay its harder for them to provide more, imagine that now.

This subject should not just concern me but every individual because I’m sure you know someone or maybe this could be yourself going through tough economic issues and with minimum wage rising it could help society live stable . The pros about raising the minimum wage in 2020 to $15 per hour is that it would reduce the chances of crime, as well as an increase chances to go to college, and lead to a healthier population. Imagine the population of increase in education more people will be able to afford going to college and the outcome will be we would have more doctors,lawyers,teachers,etc. Something we could do to make that happen is spread the word out and let your experience of your economic times so people can relate and it will get to the president like I am doing . I hope you take this subject in mind, to not only change but help society live that “American Dream” we all wish to one day have.